Colorectal surgery repairs damage to the colon, rectum, and anus through a variety of procedures that may have little or great long-term consequence to the patient. It may also involve surgery to the pelvic floor to repair hernias.

Colorectal surgery is performed to repair damage to the colon, rectum, and anus, caused by diseases of the lower digestive tract, such as cancer, diverticulitis, and inflammatory bowel disease (ulcerative colitis and Crohn's disease). Injury, obstruction, and ischemia (compromised blood supply) may require bowel surgery. Masses and scar tissue can grow within the rectum, causing blockages that prevent normal elimination of feces. Other diseases such as diverticulitis and ulcerative colitis can cause perforations in the rectum. Surgical removal of the damaged area or areas can return normal bowel function.

Colorectal cancer affects 140,000 people annually, causing 60,000 deaths. Polypectomy (the removal of polyps in the colon), usually performed during a routine diagnostic test (colonscopy or flexible sigmoidoscopy), has been a factor in the declining incidence of this cancer. However, incidence of the disease, as reported in the Journal of the National Cancer Institute in 2001, differed among ethnic groups, with Hispanics having 10.2 cases per 100,000 people, to African Americans having 22.8 cases per 100,000. Surgery is the optimal treatment for colorectal cancer, resulting in cure in 80% of patients. Recurrence due to surgical failure is low, from 4% to 8%, when surgery is meticulously performed.

Crohn's disease and ulcerative colitis, both chronic inflammatory diseases of the colon, affect approximately 1,000,000 young adults. Surgery is recommended when medication fails patients with ulcerative colitis. Usually, surgery is drastic, removing the colon and rectum and creating an interior or exterior pouch to collect body wastes. Nearly three-fourths of all Crohn's patients face surgery to removed a diseased section of the intestine or rectum.

Diverticulosis, the growth of pouches in the walls of the intestine, occurs in nearly half of all Americans by the time they reach age 60 and in practically everyone over 80. Sometimes these diverticuli become infected and diverticulitis occurs. Diverticulitis may also require surgery to remove part of the colon if there have been recurrent episodes with complications or perforations.

Some colorectal surgeons also treat pelvic floor disorders such as perineal hernia and rectocele (a bulging of the rectum toward the vagina).

There are a variety of procedures a colorectal surgeon may use to treat intestinal disorders. Until 1990, all colorectal surgery was performed by making large incisions in the abdomen, opening up the intestinal cavity, and making the repair. Most of these repairs involved resection (cutting out the diseased or damaged portion) and anastomosis (attaching the cut ends of the intestine together). Some were tucks to tighten sphincter muscles or repair fissures, and others cut out hemorrhoids. Some colorectal surgeons perform a strictureplasty, a new procedure that widens the intestine instead of making it shorter; this is used with patients with extensive Crohn's disease. 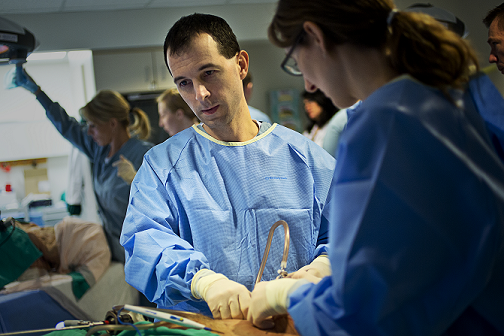 Often colorectal surgery involves creating an ostomy, which is an opening from the inside of the body to the outside, usually to remove body wastes (feces or urine). There are several types of ostomy surgeries that colorectal surgeons do. A colostomy is a surgical procedure that brings a portion of the large intestine through the abdominal wall, creating an opening, or stoma, to carry feces out of the body to a pouch. An ileostomy removes the entire colon, the rectum, and the anus. The lower end of the small intestine (the ileum) becomes the stoma.

For all ostomies, a pouch will generally be placed around the stoma on the patient's abdomen during surgery. During the hospital stay, the patient and his or her caregivers will be educated on care of the stoma and the ostomy pouch. Determination of appropriate pouching supplies and a schedule of how often to change the pouch should be established. Regular assessment and meticulous care of the skin surrounding the stoma is important to maintain an adequate surface on which to attach the pouch. Some patients with colostomies are able to routinely irrigate the stoma, resulting in regulation of bowel function; rather than needing to wear a pouch, these patients may need only a dressing or cap over their stoma. Often, an enterostomal therapist will visit the patient in the hospital or at home after discharge to help the patient with stoma care.

Most colostomies and ileostomies are permanent. Temporary colostomies are created to divert stool from injured or diseased portions of the large intestine, allowing rest and healing. Although colorectal cancer is the most common indication for a permanent colostomy, only about 10–15% of patients with this diagnosis require a colostomy.

A new procedure called an ileoanal anastomosis creates an internal reservoir that is sewn to the anus and acts as an artificial rectum. It usually is not used with Crohn's disease patients because their disease often recurs.

Laparoscopic surgery is being used with many diseases of the intestinal tract, including initial cancers. For this surgery, the colon and rectal surgeon inserts a laparoscope (an instrument that has a tiny video camera attached) through a small incision in the abdomen. Other small incisions are made through which the surgeon inserts surgical instruments . This surgery often results in fewer complications, a shorter stay in the hospital, less postoperative pain, a quicker return to normal activities, and less scarring. It is not recommended for patients who have had extensive prior abdominal surgery, large tumors, previous cancer, or serious heart problems.