Since its founding in 1970, SIU School of Medicine has included instruction in the medical humanities to balance the focus placed on the applied sciences. In 1992 a pair of students -- Manish Kohli and James Davis -- initiated the 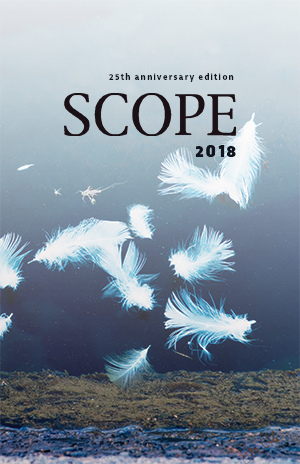 creation of Scope, an annual literary arts magazine to serve as a creative outlet for SIU’s medical community. Poems, short stories, artwork and photography are submitted by SIU students, physicians, alumni, staff and family members each winter. Selections are made by editorial staff and monetary prizes given to the top entries in three categories: art, poetry and prose.

Awards were given to the top three entries in each category:

ART -- Tom Ala, MD, a professor in neurology, won first place for his photograph, “Jolly Rancher.” The digital image is featured on Scope’s cover. Marie Varnet, a third-year student from Mackinaw, won second place for her charcoal drawing “Triptych.” Emily Wade, a first-student from Taylorville, won third place for the acrylic painting, “Tides of Blue.”

PROSE -- “The Race Is Not to the Swift” by Wesley Robinson-McNeese, MD, an SOM alumnus and SIU system director for diversity initiatives, received first place, for his short story of a Depression-era tragedy. Second place went to “Dry Eyes, Steady Hands,” by Melanie Barnard, MD, a resident in surgery. Third place was “On Books and Libraries,” by Kathryn Waldyke, MD, an assistant professor in the Physician Assistant Program.

POETRY -- First place was awarded to “Observation Room” by Dr. Robinson-McNeese, for his impressionistic verse on the death of Chicago’s Mayor Harold Washington. Alumnus John Grace, MD, won second and third place for his poems “When Everything Is Grand” and “I Stabbed the Buddha.” Dr. Grace is a psychiatrist in Crystal River, Florida.

Two additional art prizes were announced at an April 17 luncheon in the school’s Pearson Museum. The Dean’s Choice Award was given to Emily Wade, for her painting “Tides of Blue,” and the People’s Choice Award was given to Lori Hinderliter in the Department of Surgery, for her cross-stitch artwork “French Bistro.” Founding co-editor James Davis, MD, also spoke at the event, discussing Scope’s origins. Dr. Davis is a practicing physician of internal medicine at Duke University, in Durham, NC.

Copies of Scope are mailed to students and alumni of the medical school and available upon request from the Office of Public Relations, 217-545-2155. The publication can also be viewed online at www.siumed.edu/scope.