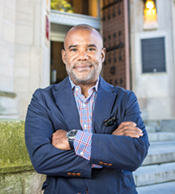 Bryan Samuels is the Executive Director of Chapin Hall, one of the nation’s leading research and policy centers focused on improving the well-being of children and youth, families and their communities. He has spent his career building the capacity of child-serving systems to produce positive outcomes for children, integrating empirical evidence into public policy and service delivery, streamlining management and operations in government and non-profit agencies, and emphasizing the emergence of a cutting-edge body of scholarship in neuroscience and its potential for innovative contributions to understanding the effects of maltreatment on child development.

Before joining Chapin Hall, Samuels was appointed by President Barack Obama as Commissioner of the Administration on Children, Youth, and Families (ACYF), making him from 2010-2013 the highest-ranking federal child welfare policymaker in the country. As ACYF Commissioner, he emphasized the importance of child well-being and the use of data-driven approaches to improve the welfare of vulnerable children and youth. Samuels has over twenty years of experience in child-serving systems, including having served as the Chief of Staff of Chicago Public Schools and as Director of the Illinois Department of Children and Family Services. He was also a lecturer at the University of Chicago’s School of Social Service Administration from 1997 to 2003. He has a Bachelor’s degree in economics from the University of Notre Dame and a Master’s degree from the University of Chicago Harris School of Public Policy.