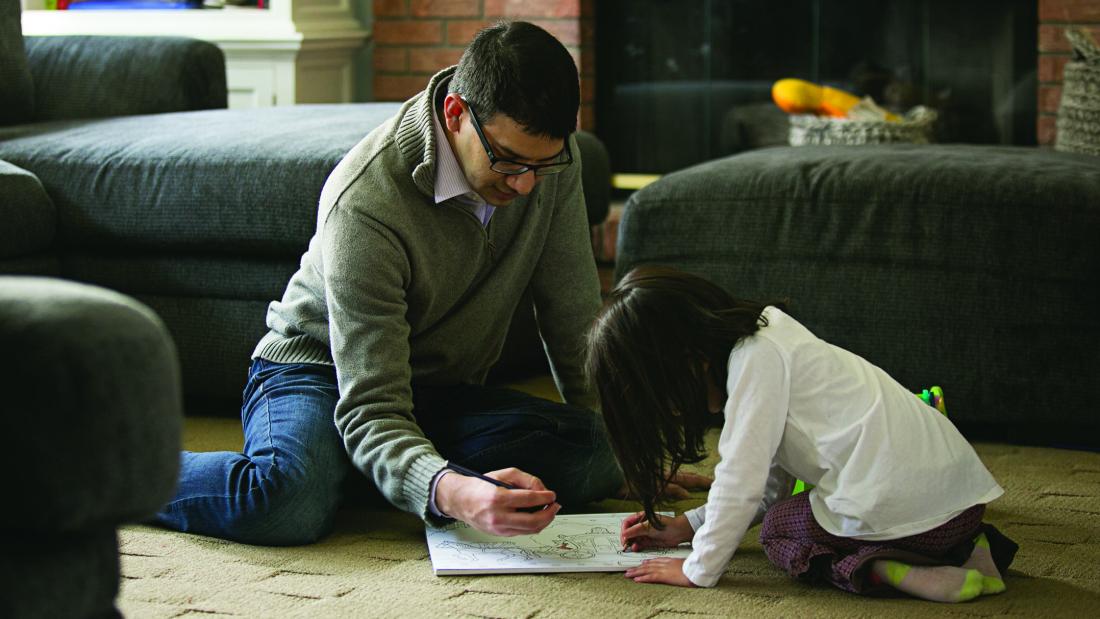 As a pediatrician, Sameer Vohra, MD, JD, ’11, was trained to focus on the children seen in his clinic. Now his task has expanded to healing entire segments of Illinois’ population. It’s a role he has been preparing for most of his life.

When the SIU Office of Population Science and Policy was launched in the fall of 2016, Sameer Vohra, MD, JD, was named executive director. As an assistant professor of pediatrics and medical humanities, his mission was formidable: assemble a team from scratch to study the health and societal hurdles that have the greatest impact on residents within SIU’s service region and create programs to improve their health.

Providers recognize that only 20 percent of a person’s health outcomes are determined by what he or she encounters in the health care setting. The other 80 percent are affected by one’s socio-economic status – income, education, employment, community safety, the physical environment in which the person lives, and their behaviors. To treat the whole patient and achieve better health outcomes requires a paradigm shift in focus. It requires thoroughly understanding the social determinants of health.

“It’s a difficult problem to tackle and scale,” says Dr. Vohra. But he sees the challenge as part of the appeal.

Dr. Vohra, 35, credits Dr. Jerry Kruse, dean and provost at SIU School of Medicine, for the belief that a research and policy organization should not only provide information but also be socially accountable and make an impact.  “We constructed the office to be both a think tank and a ‘do’ tank,” Dr. Vohra says. He began by putting together a talented senior leadership team that makes him “excited to go to work each day. It makes you feel like anything is possible.”
It’s a familiar feeling to the young physician.

Support Systems
Dr. Vohra is the eldest son of Indian immigrants, born in Chicago and raised in Westmont in DuPage County. As a boy, teachers and friends boosted his confidence that he could be successful in whatever he pursued. His mom was a dentist and his dad a pharmacist. While his parents encouraged health-care career paths for Sameer and his siblings, a young aunt’s death from breast cancer shook his early faith in medicine.

Eventually, as he spent time volunteering and working with his father in a hospital, he began seeing the unique ability of health care to change and positively impact the life of an individual.

And he was also thinking of a bigger picture. “Growing up, there were a lot of moments when I wondered, ‘How do you change social structures and social engines to create change?’ That was being done in government, in politics and in law.”

As an undergrad, when Dr. Vohra first heard about a dual medical degree/juris degree program, he realized a path was available to become both a doctor and a lawyer. However, at the time there were fewer than a dozen MD/JD programs in the country and less certainty about what one could do with a dual degree, he says. Vohra felt he could have a greater impact as a physician, so he applied to medical schools and a few of the MD/JD programs.

During his SIU admissions interview, Dr. Vohra met Ted LeBlang, JD, then chair of the Department of Medical Humanities and founder of the six-year MD/JD program. When Vohra spoke of wanting a career that could affect whole regions of Illinois, LeBlang outlined how matriculating in Carbondale and Springfield would give him a better understanding of the state. “He convinced me that everything that I wanted to do in my career and during the next six years would be realized,” Vohra says. “He promised me that I would not regret my decision.”

The conversation stuck with Dr. Vohra. “Coming here provided me with the foundation for the opportunity that would come later. Ted LeBlang was one hundred percent right.”

Other SIU mentors fostered his growth. Gene Basanta and Tom Britton were boosters at the School of Law. “They pushed me to do things even when I was a medical student that hadn’t been done,” he says. “In Springfield I had Dr. Dorsey, Dr. Klamen, Dr. Constance, Dr. Albers, and so many people who believed that I could do and achieve anything in my career.”

Dr. Vohra spent a summer studying in Cairo, Egypt after his first year in law school and then worked for the CDC Public Health Law program. He was named a Fulbright Scholar after his third year in medical school and performed pediatric health outcome research in India for eight months. He took on some executive national leadership positions as a student at the American Medical Association (AMA) and the Association of American Medical Colleges (AAMC). “It proved to me that I could succeed at the highest level with people who had gone to universities across the country, and I could lead them. I had valid ideas that in situations could mobilize action.”

Fortunately, the hectic pace didn’t occur at the expense of his personal life. Dr. Vohra met his wife-to-be, Tasnim, on a blind date in Chicago during his second year of medical school. When the Fulbright Scholarship occurred at the 15th month of the relationship, Dr. Vohra acted decisively and proposed. “I knew I wanted to spend the rest of my life with her,” he says with a smile.

Holistic View
During his undergraduate years at Northwestern, another mentor had planted a seed that is now bearing fruit. Vohra majored in political science and science in human culture. Dr. Ken Janda was the chair of the political science department and encouraged the second major. “To go to most medical schools, you major in biology or chemistry. Ken told me that understanding politics, philosophy, sociology, and the psychology around medicine would make me a more interesting and understanding physician.”

Vohra champions a holistic view of health care within his new career at the OPSP. “Doctors live in a world driven by the natural sciences. But the world is complicated and comes increasingly in shades of gray. The decisions that we make around medicine, when you have to figure out how to best treat the patient, how to best change their behavior, how to allow them to be as healthy as they can be, those lines aren’t as clear,” he says. “The physicians who can balance the science and the art of medicine are the ones who are going to make an impact and change behavior to make individuals healthy.”

With a better understanding of a patient’s life circumstances, treatments can be refined and prevention emphasized, creating new efficiencies, he says.

Like patients, rural communities are also different from one another, and the devil is in the details. The OPSP has a traditional science division led by Wiley Jenkins, PhD, to analyze and understand data in order to create effective solutions, as well as a policy division led by Carolyn Pointer, JD, to understand how to shape policy using those evidenced-based solutions. “The challenge is to create the types of policy to make a change sustainable, not something that relies on a grant cycle,” Vohra says. “We want to create a plan that a community can take ownership of and use to move forward.”

Dr. Vohra believes it’s a logical way to address a major societal problem. “We spend so much money on health care, but we don’t have good outcomes overall compared to our developed country peers. If we can combine a model for public health science with social innovation and sustain it through policy change, we can create a solid system.”

This is where a background as a policy wonk can come in handy. Dr. Vohra has observed the state and national political arenas and seen how the promise of a new approach can entice an audience fed up with the status quo. “You want to make a change. But you have to understand how complicated our political and social systems are if you want to move the dial and truly accomplish something. You have to accept compromise, take small victories.”

“If you want to have everything, you often get nothing,” Vohra says. “It’s been a great lesson for us around the office. One of our mottos is ‘Aim big, but settle for progress.’”

Dr. Vohra was named an Edgar Fellow in 2016, one of 40 emerging political and policy leaders in Illinois.  This honor allows him the opportunity to spend time with legislators, government officials and others who have served the state and country. Dr. Vohra knows the importance of working with policymakers to educate them on improving the health of their constituents.  Although public service has always appealed to him, he knows how important his current work is. “I love my job, and I see the unique ability to make an impact on the residents of central and southern Illinois. It is a great honor to have a job that is so meaningful.”

He’s been helped by a familiarity with the SIU system and some established relationships here and in the downstate region. “Much of the way we’ve built our office is, we think of it as a start-up. We have the reputation of this great medical school behind us, but we’re small and our task is so big, we have to be nimble. And we’re allowed to be as creative and imaginative as necessary to tackle and solve problems.”

Since 21 of the 25 top counties with the worst health outcomes are in the SIU service region, there’s a lot of work to do, says Dr. Vohra. “Change is going to take time. Health outcomes are generational-type shifts. We’ll need to celebrate the small victories that show progress even if it’s slower than we want when you’re dealing with entrenched societal problems.”

He adds that the community can help the progress by donating to OPSP through the SIU Foundation (www.siumed.edu/foundation/giving.html). “There’s a lot to do and a lot still to learn, but we’re finding that communities are interested. We’re getting a lot of calls for help. We’re getting our pilot programs out. We’re beginning to make the small differences.”